Located in the center of old town, Kempinski Hotel Nanjing is adjacent to the Ming Dynasty Palace Ruins, the world’s largest palace complex during the Middle Ages. To remind people of the transient yet glorious dynasty and to endow the hotel with unique memorable points and core competitiveness, the designer applies cultural elements of Ming Dynasty to the magnificent space to give a review of the ancient Chinese civilization that appeared 600 years ago, so as to build an exclusive Kempinski for Nanjing. 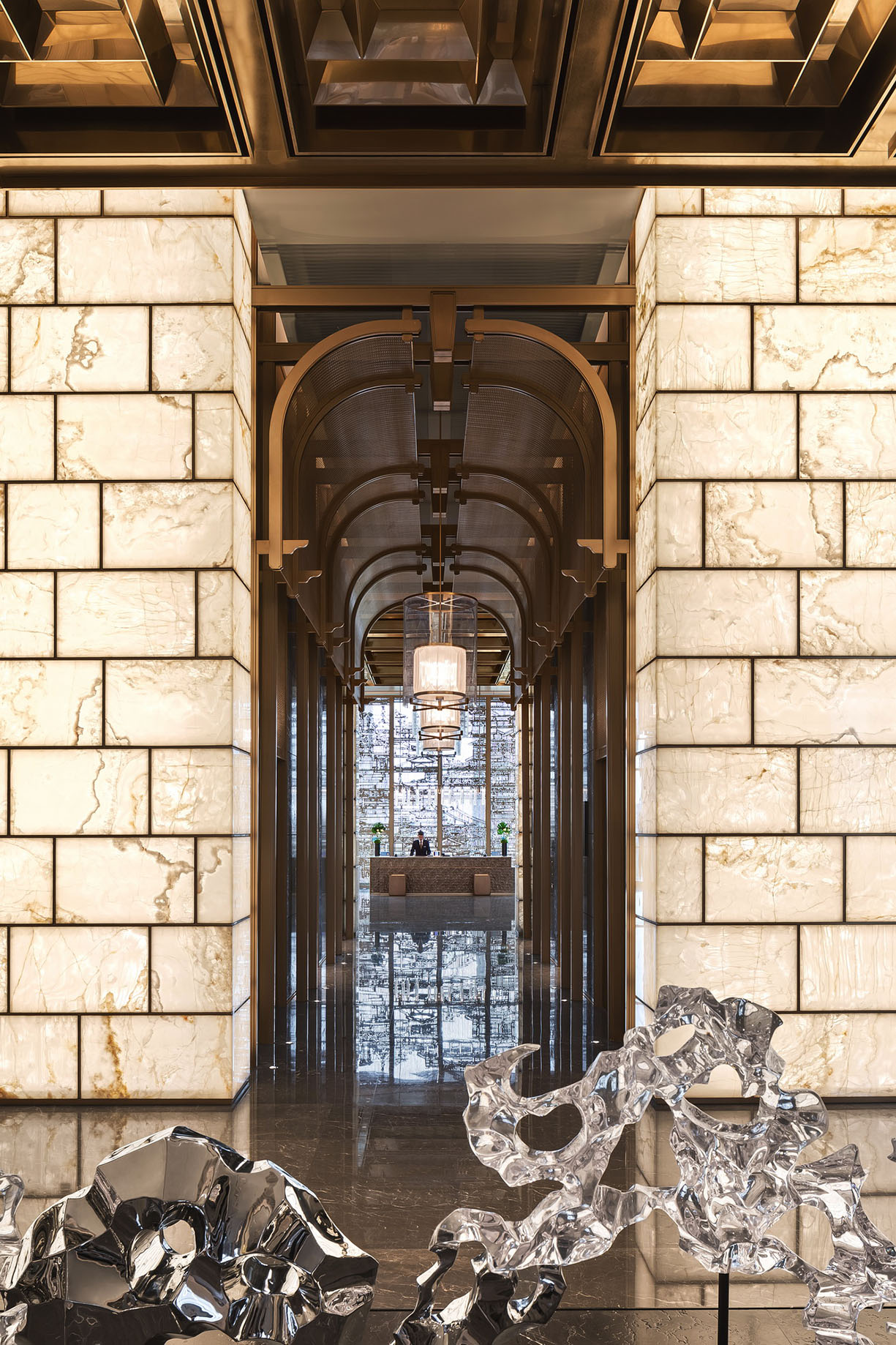 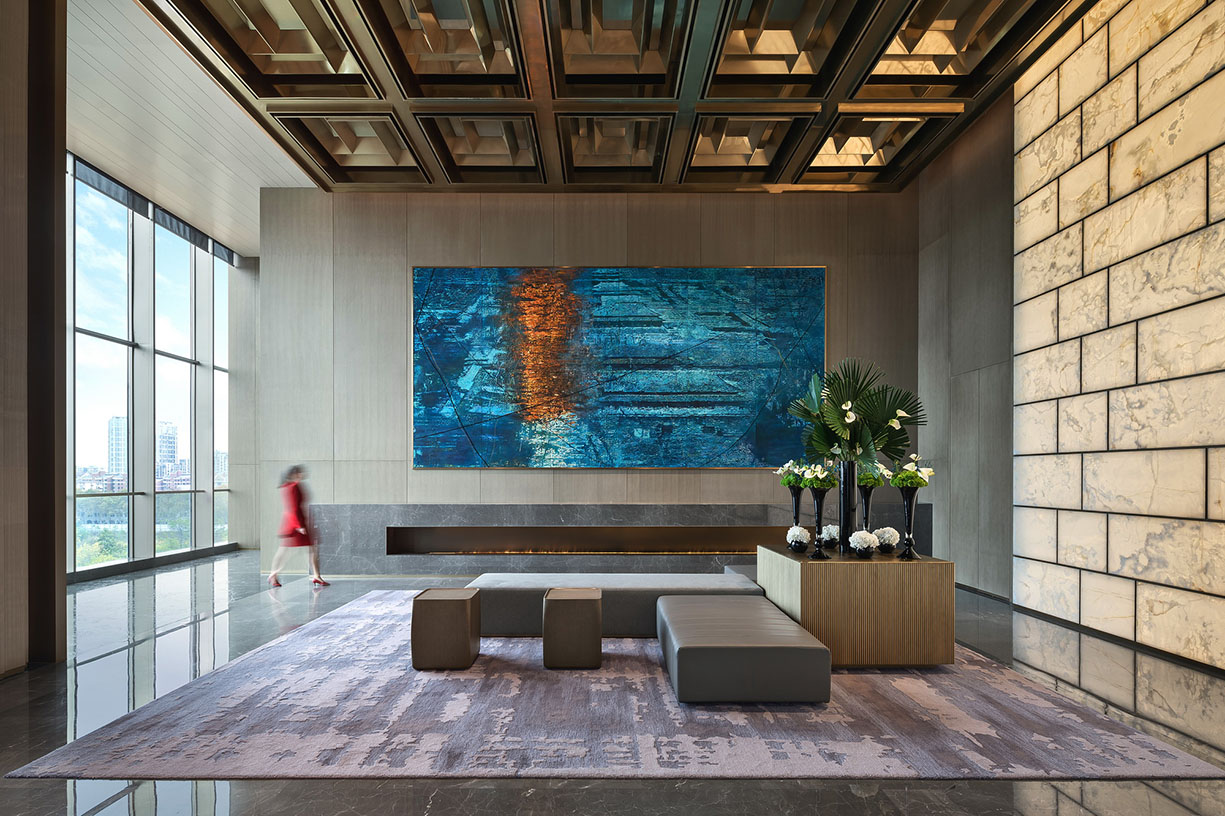 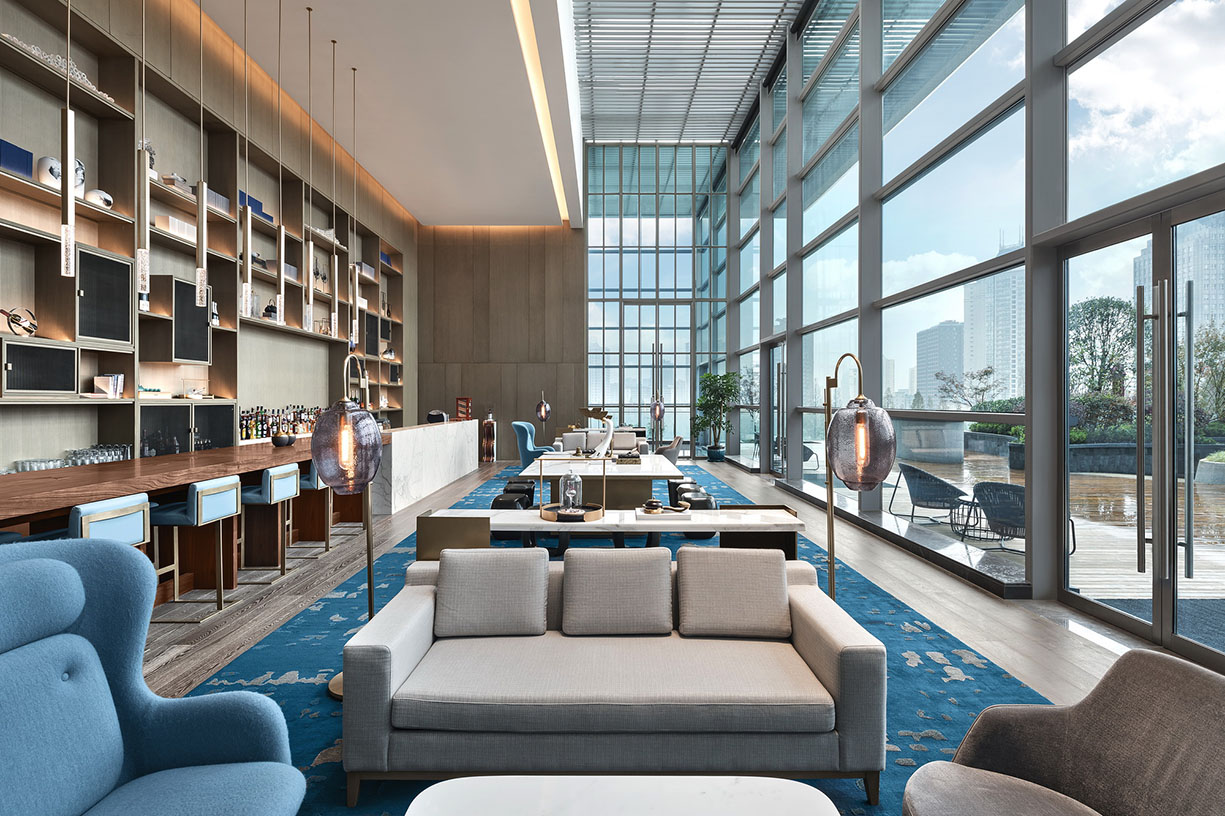 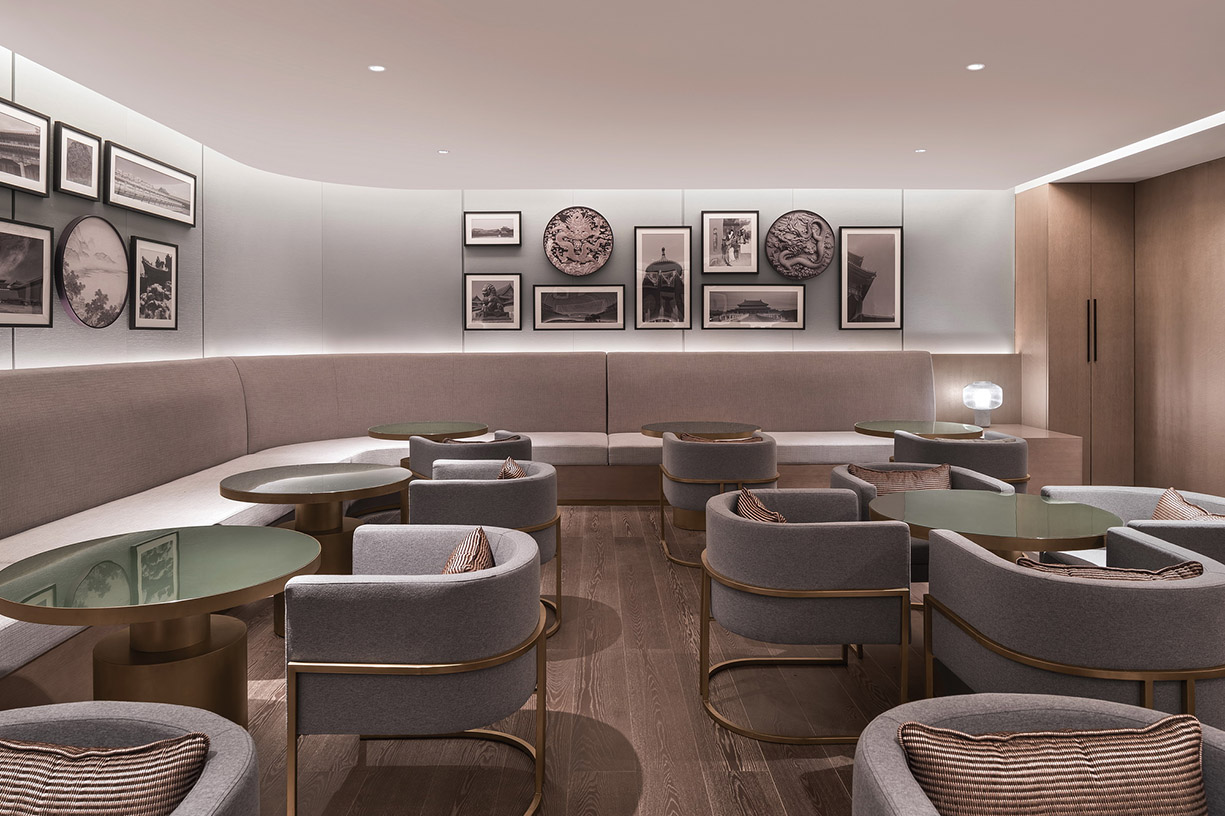 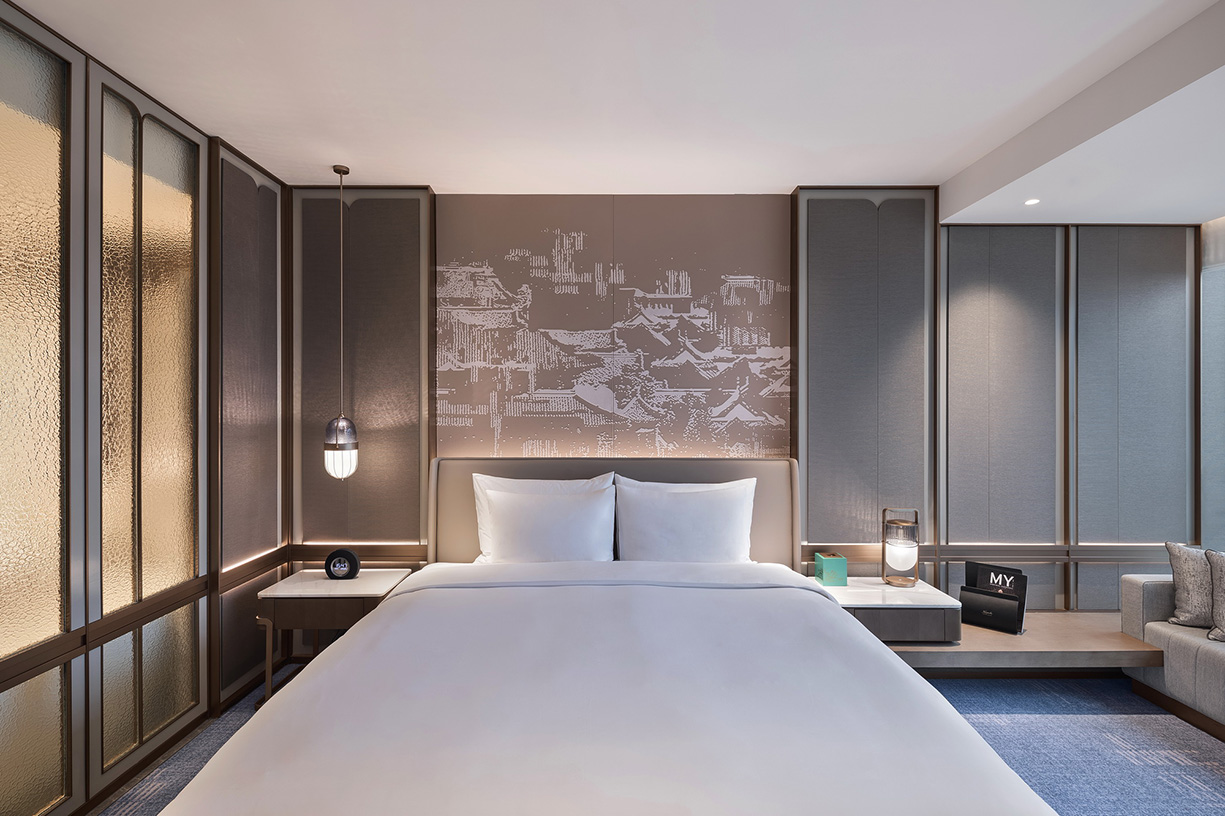 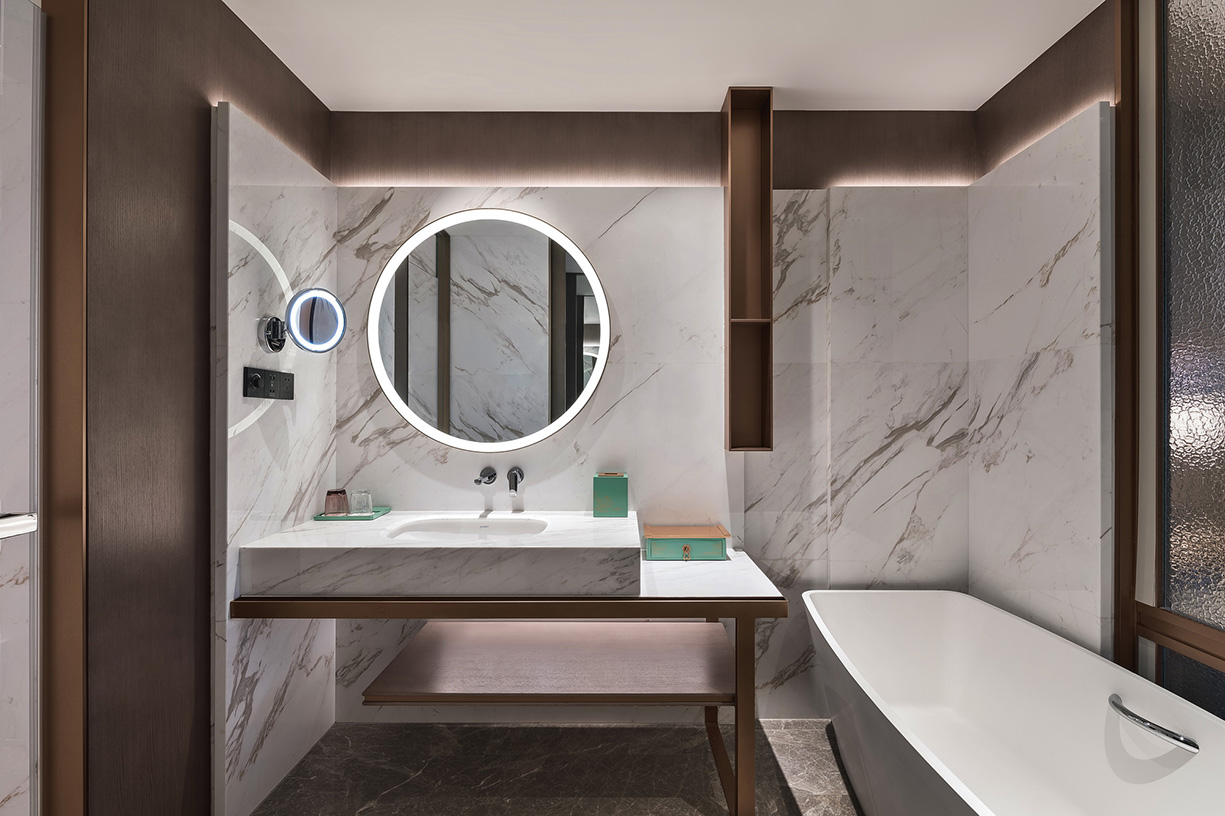 Typical cultural themes of Ming Dynasty, such as the “Imperial Palace”, “Jiangnan Examination Hall”, “Qinhuai Night Scenery” and “Jinling Taverns”, are included into the space design. Through modern design approaches, rather than simple history reproduction, the design simplifies the otherwise complex palace architecture and royal culture, making the space both an epitome of history and a place that meets modern people’s residential requirements, as well as a perfect integration of international hotel brand advantages and local ethnic features.

The lobby draws inspiration from the main hall of the Ming Palace, a venue where the most important ceremonies took place in ancient times, and borrows classical elements like the “coffered ceiling” and the “Ming Dynasty city wall” to create a grand history atmosphere and highlight the hotel’s high hospitality standards. The full-height bookshelves and ribbon-shaped ceiling decoration in the lobby lounge echo the qualities of ancient scholars. In the ADD restaurant, the service counter with hanging shelves above recalls the scene in ancient taverns. And another traditional element - “screen” - is fixed asymmetrically on the guestroom wall to show the sheer beauty of art.

The lobby was the pain point of design. Its east-to-west orientation, plus the glass-structured curtain wall, introduces strong sunlight to the interior space. To reduce light transmittance, the ceiling is decorated with dark metal instead of conventional white paint to darken the tone in the space. Carved feature screens, made of double-layered metal panels and placed at the reception, not only help weaken dazzling light, but also lead guests into historical context through the Ming royal architecture motif.

In terms of circulation design, considering business requirements and later-phase operation, the designer separates public areas from guestroom areas. The lobby and guestrooms are on a higher level, which can be reached via dedicated elevators and therefore provide a better and more private living experience. In contrast, the ballroom and restaurants are at the first floor to facilitate hotel guest services and attract surrounding potential customers as well. What’s more, the lobby lounge, meeting room, bar and other adjacent function areas share the F&B preparation system to optimize public space efficiency while maximizing the hotel’s revenue.