Wanli district is known as “the backyard of Nanchang” and the birthplace of Chinese classical rhythm. The nearby 15,000-hectare Meiling National Forest Park makes the site of the project a gigantic natural oxygen bar. From the marvelous and mysterious nature, YANG draws design inspirations, and creates a 40,000 square meters eco-resort with local cultural aesthetics for business travelers. 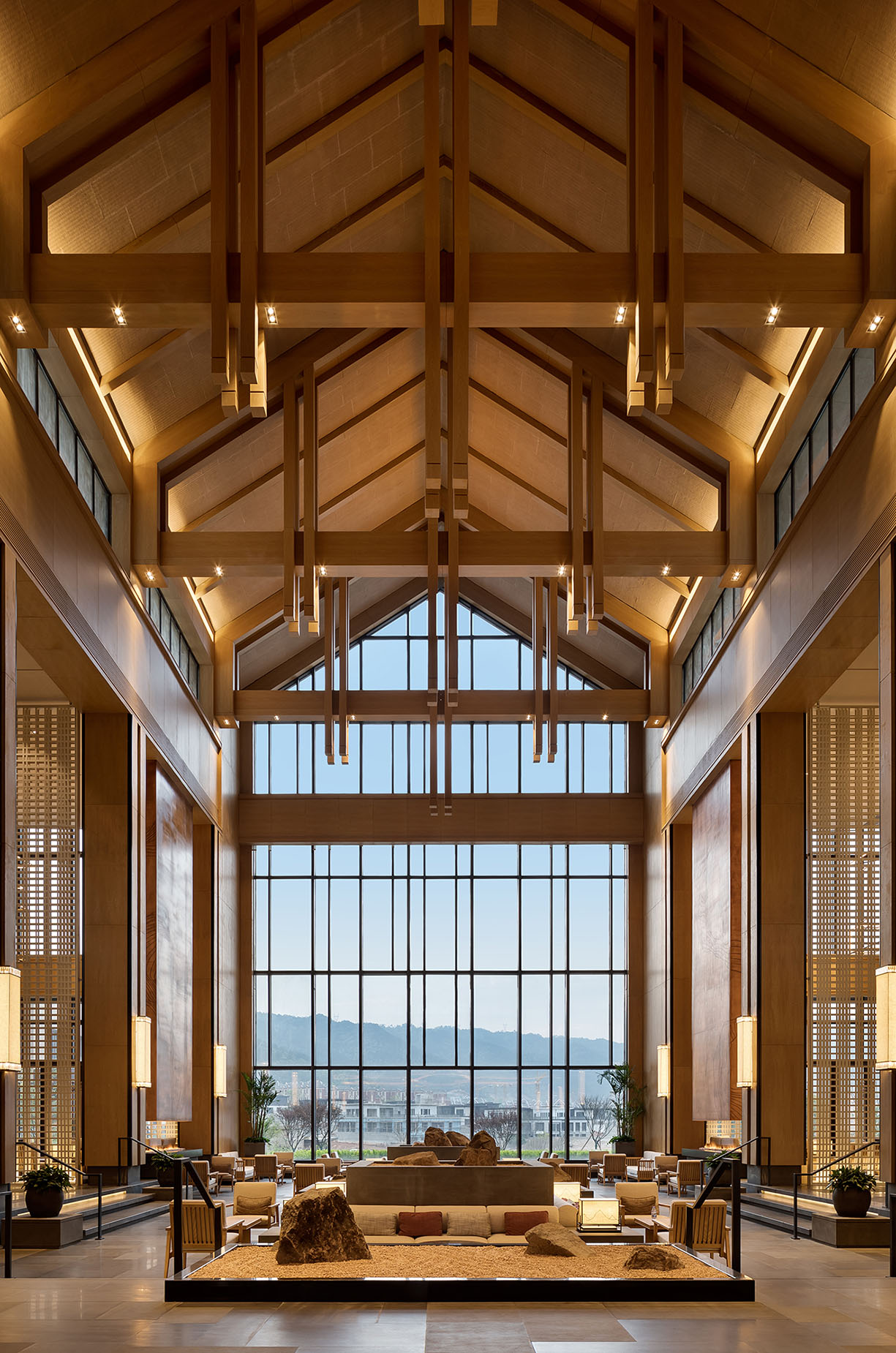 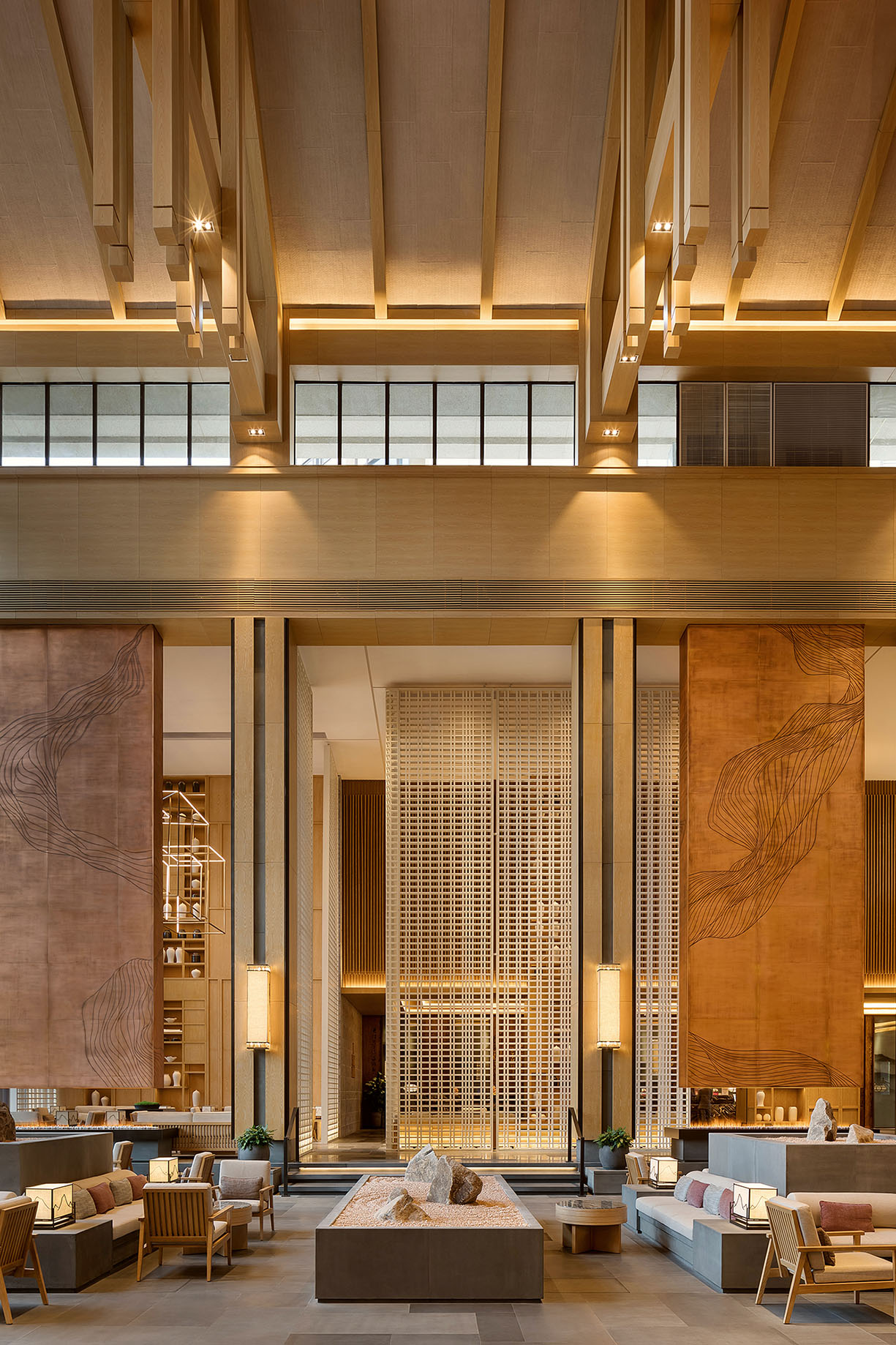 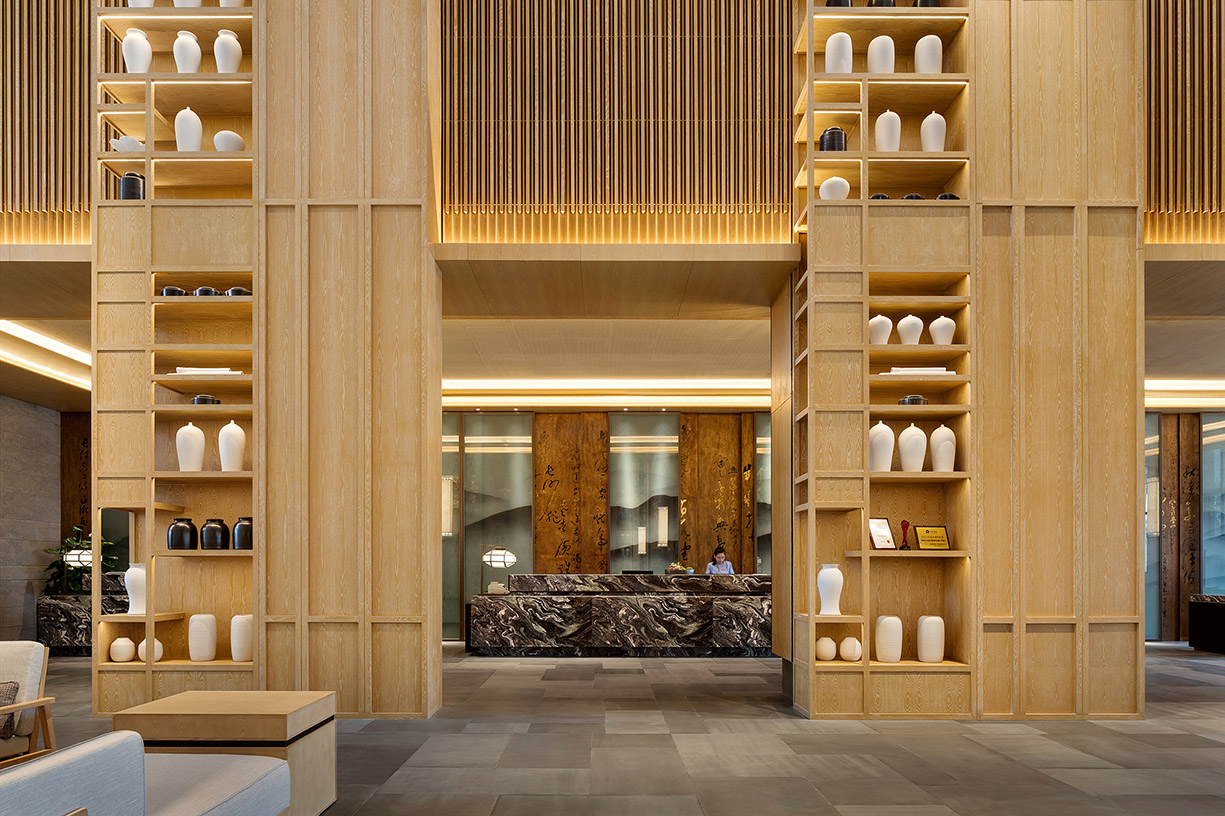 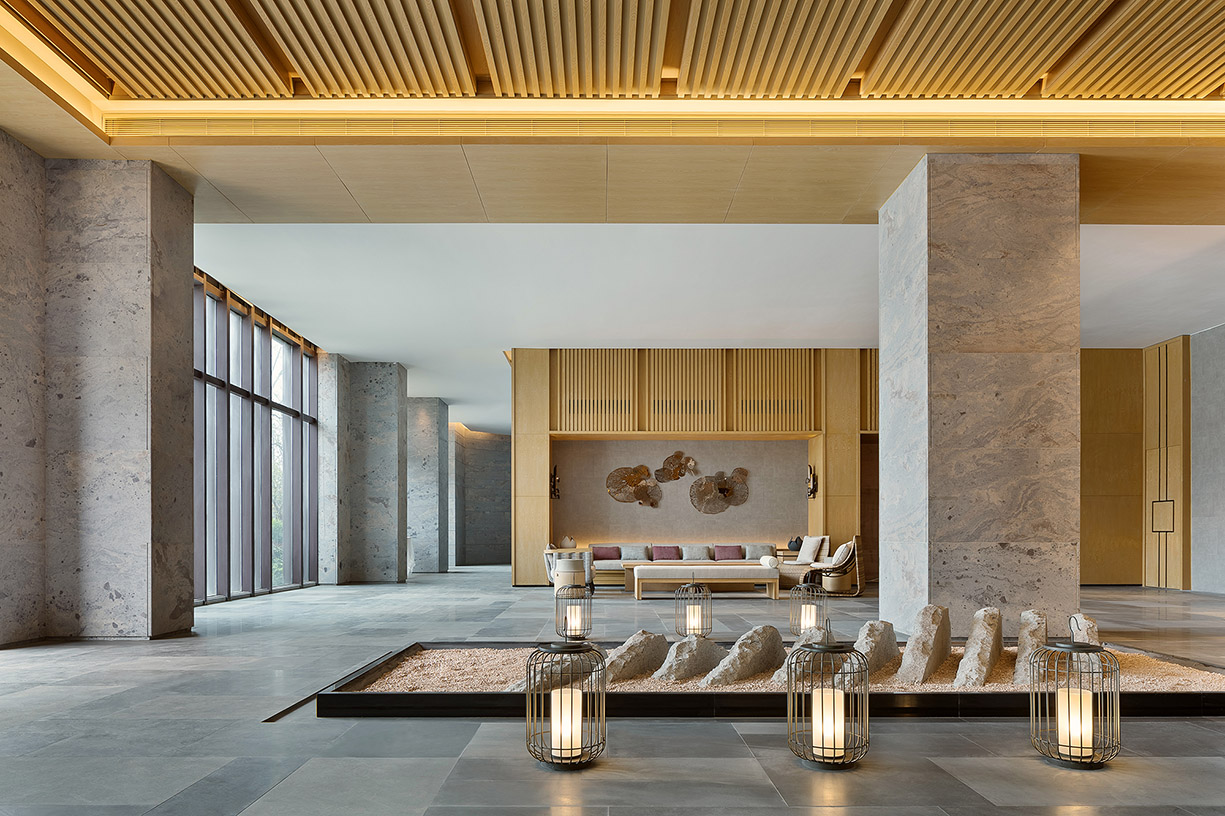 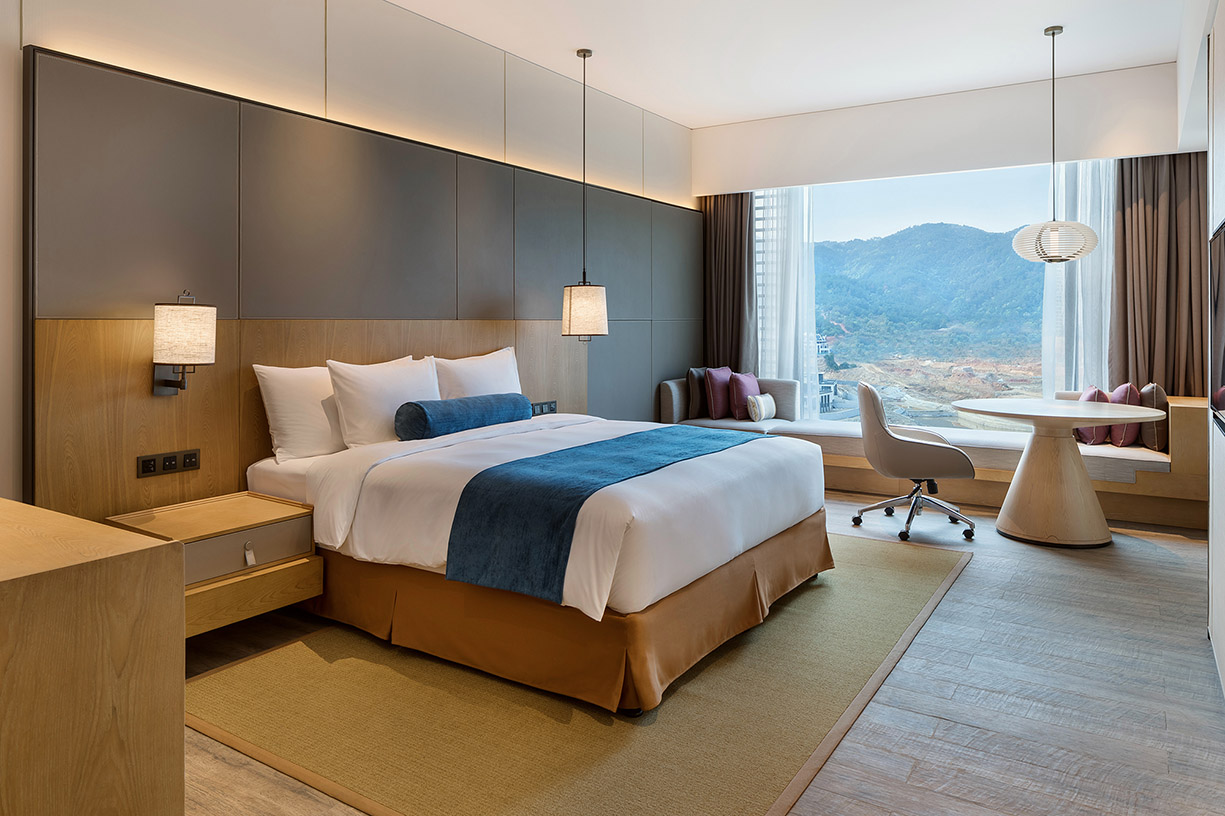 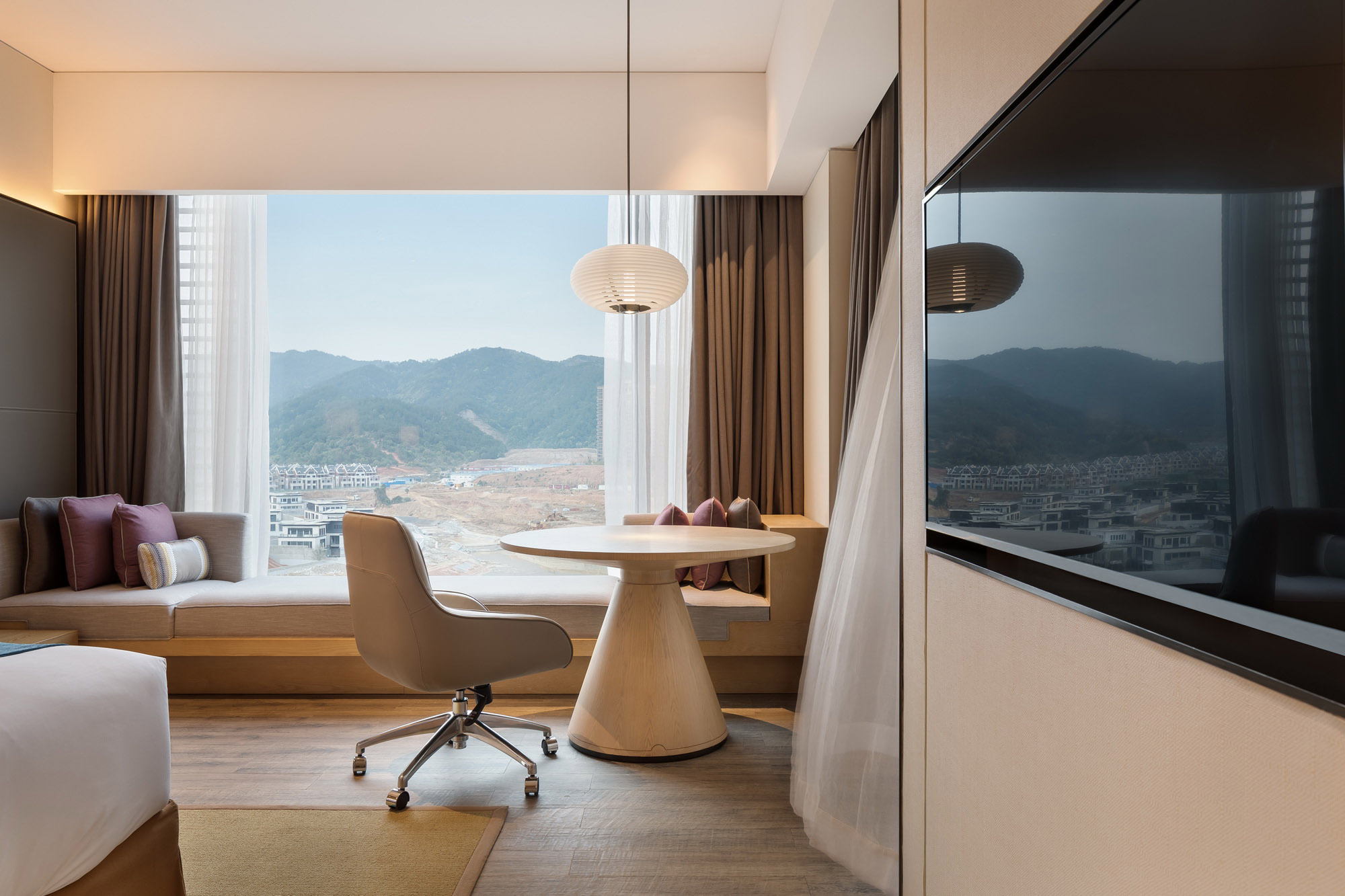 With a sloped ceiling and a highest point of 13 meters, the original structure of the lobby is relatively high. To make the space less inapproachable, YANG creates innovative beam structures out of traditional Chinese architecture. By using aluminium plates with wood texture, an architectural and relaxing touch has been brought into the space. And there are four installations derived from the running water surround the stone features in the center, creating a rhythmic space with mountain and river aesthetics.

YANG spares no efforts in creating the hotel a place with effortless natural aesthetics, while taps into the peculiar memories of this City of Heroes, and then makes a great combination of its natural scenery and cultural legacies. Six pieces of calligraphy artworks writing the Preface to the Prince of Teng's Pavilion make up the backdrop of the front desk. In companion with traditional Chinese brush drawings, this masterpiece of famous poet Wang Bo brings all the guest into the imaginary pavilion at the peak of the hill, where one enjoys a panoramic and picturesque view with literati from the past times.

By appreciating the sounds of nature, indulging in the beauty of culture and discarding intricate styles and materials, YANG seeks the essence of the space, and eventually creates a natural interior wonderland in a modern minimalist design language. As the first five-star luxury hotel in Wanli district, Crowne Plaza Nanchang is a perfect example of great integration of the interior, the architecture and the landscape, and thus will become the ideal destination for tourists and locals to explore nature while having themselves refreshed.